Being geographically located in the middle of the Asia, Africa and Europe, Cyprus is the ideal destination for patients to combine medical treatment with tourism.
Cyprus is a member of the European Union since 2004 and its healthcare system is of the highest standards. The World Health Organization recognizes health standards of Cyprus being very high, easily comparable to other developed countries around the world.

The Mediterranean Hospital facility provides an exceptional option for doctors and patients to easily access and be involved in developing the knowledge and skills needed for the use of the Da Vinci Robotic System technology safely and efficiently next to worldwide expert surgeons. Offering a wide range of services, the hospital has dedicated an upgraded super luxury unit in honor of our doctors, being ready to accommodate for the needs of the patients selecting it.

Cyprus is the third largest island in the Mediterranean, with its population estimated to be more than 830.000 people. The strategic location of the island has played an important role in establishing Cyprus as a very popular tourist destination and an ideal location for attracting international patients.

Lifestyle: Due to its multicultural and diverse population, Cyprus is a cosmopolitan place to live in. Cyprus has an excellent reputation for being a safe and friendly place. More than 170.000 foreign nationals live and work in Cyprus.

Climate: Cyprus has a mild Mediterranean climate, while being the sunniest country in Europe. According to the World Health Organization, the environment in Cyprus is one of the healthiest in the world and is relatively unspoiled by industrialization.

People: The country has multilingual and highly educated workforce, while Cyprus is the second top spender in education relative to GDP in the EU. Although the native language is Greek, the English language is widely spoken by most of the people. 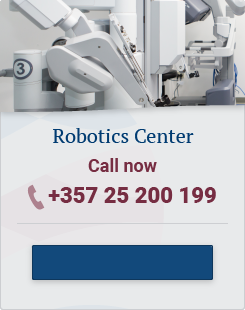 We are grateful to have scored a 96.43 % satisfaction rates by our patients and visitors for the year 2016, an honour we could not have achieved without the patients and families who inspire us to do our very best for them.